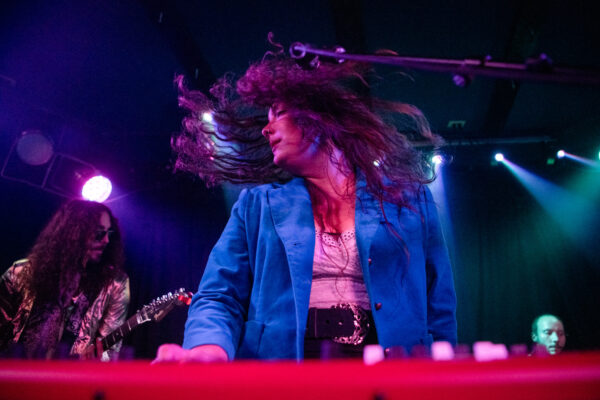 Music Yukon is thrilled to support local musicians who are showcasing at major industry events over the next two weeks.
Check out who is up to what below!

the august arrival’s “well composed, intimate, even mystical folk rock” sound centres around the songwriting of Sara MacDonald. Their most recent release, “All Blue and Gold”, sets a sparse acoustic instrumentation within a modern soundscape. The songs are carefully crafted confessions of the most human thoughts and feelings. Within this lyrical honesty, listeners find a sense of comfort—disarmed by the universality of many of life’s questions and feelings. Stripped-down to their acoustic origins, the haunting melodies and impassioned vocal performances cause you to wonder if you should feel a bit guilty for eavesdropping on a reflective private moment. the august arrival’s upcoming album “Fleeting and Forever” is set to be released in 2023.

Originally hailing from Faro Yukon, Elijah Bekk used his time in this secluded little town of 400 people to hone his skills as a guitarist, pianist, vocalist, and songwriter. Elijah has had the privilege of performing with many talented musicians, and winning many accolades including but not limited to; Finalist: Canada’s Walk Of Fame/RBC’s Emerging Musician Program 2020, Winner: Yukon Commissioner’s Music Award, Winner: Olds Alberta Jazz Band Scholarship, and has opened for Ed peekeekoot, Local Boy, and The Birds of Bellwoods. Elijah is currently working on his first album and hopes to have his first songs released this fall, bringing you the perfect mix of indie and soft rock.

Erica Dee Mah is a multi-instrumental musician and singer-songwriter based in Whitehorse, Yukon. This spring, she released “The Sargasso Season”, an original collection of songs written on the guzheng, a 23-stringed Chinese harp. The album is an exploration of sounds and possibilities on a versatile traditional instrument, and seeks out a place for the guzheng in Canadian folk-roots music. Erica writes about transoceanic journeys, Chinese-Canadian identity across generations, and finding connection in new landscapes. Exclaim! Magazine recently named Erica one of the “must-hear” emerging artists in Canada. She frequently performs with her husband, Darcy McCord, a classically-trained cellist, creating a unique orchestral folk sound. Erica’s performances are intimate, innovative, and captivating, sure to transport audiences to another world.

Joey’s nostalgic folk songs live in spruce forests, dog parks, and all along the Trans-Canada Highway. Though much time is spent cutting kindling and hauling water around a Klondike cabin, her critically acclaimed sophomore album, Ever Ahead (produced by pedal-steel legend Aaron Goldstein), was brought forth in 2020 – an undeniable road-trip record that is “rife with playful poetry and sees O’Neil casually bounce between tongue-in-cheek lyrics and a true sense of heartbreak” (CBC Arts). With themes of trucks, dogs, and mental health, she presents a fresh, queer perspective to some classic country tropes through vulnerable vocals, canorous string plucking, and striking steel solos. Having shared stages with Julie Doiron, Basia Bulat, and Jennifer Castle, Joey ventures back and forth between the Yukon and Ontario, hypnotizing audiences with intimate anecdotes from her off-grid routine and long-haul highway life. Joey and Oblio have just completed a “dog park tour” of Canada.

EVERYBODY ASKS ‘WHO IS LOCAL BOY?’… NOT ENOUGH PEOPLE ASK ‘HOW IS LOCAL BOY?’ WELL, LOCAL BOY IS DOING JUST FINE. THEY LAYED LOW IN THE FAR NORTHWEST CORNER OF CANADA OVER THE PAST TWO YEARS, CREATING MORE CONTENT, AND MAXIMIZING THEIR TIME WITH THEIR ARTISTRY. AS A DUO WHO COLLABORATE FROM SONG CONCEPTION TO RELEASE, THEY REALLY ARE A WELL OILED 2 STROKE ENGINE. PROJECTING RAW EMOTION, CONVICTING EXPRESSION, AND SERVING A CAPTIVATING EXPERIENCE, JEREMY PARKIN & KELVIN LEAVE IT ALL OUT ON THE STAGE FOR THEIR AUDIENCE. WITH A 3 SONG EP RELEASE (ONE FOR JAMES) IN LATE APRIL, THEY CONVEY THE GRIEVING PROCESS OF LOSING A FRIEND OVER THE COURSE OF THE PANDEMIC.

Magnolia is an alternative folk singer-songwriter. She has been playing for as long as she can remember, singing in harmony around the house with her mother and grandmother, and brings her lifetime of playing to create a sound that blends contemporary folk with influences of old jazz and classic country. Magnolia’s current EP release, Confluencer (LHM Records), was produced by Hill Kourkoutis and features songs written in a little cabin through a Yukon winter in Dawson City. Confluencer brings together saxophone, guitar, strings, and electronic sounds to create a unique atmosphere in a genre all its own. Magnolia will be supporting the EP with a tour in Eastern Canada in Fall 2022.